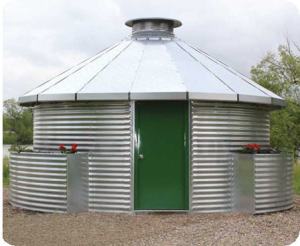 Unconventional houses can take many forms — think cob, straw bale and underground homes — and now we can add grain bin homes to the list of inexpensive alternative-living options. Snatching up used grain bins is one way of turning the cylindrical, metal structures — traditionally used to store grain — into homes. (For more on grain bin houses, read How to Build a Grain Bin House.) But now, a new kind of grain bin house is becoming more widely available.

How would this home be valued?  Contact the appraisers at www.scappraisals.com for your value questions.

Sukup Manufacturing, a family-owned company in Sheffield, Iowa, manufactures agricultural products, including grain bins. In 2010, the business began planning the production of grain bin homes in response to the 2010 Haiti earthquake. In partnership with Global Compassion Network and Iowa residents, Sukup created an emergency shelter from a grain bin, which it called the Safe T Home. In February 2012, shipments of Safe T Homes were sent to Les Cayes, Haiti, where Sukup employees and Haiti residents worked together to erect the structures, forming the “Village of Hope.” Safe T Homes are now also available in the United States. Prices start at $5,700 for nonprofits that intend to use the homes for humanitarian efforts (contact your local dealer to find prices for your area).

The Safe T Home is made of steel and offers 254 square feet of interior living space. An inexperienced team can build one in just a few hours. With a solid steel door and latched screens in front of the windows, the Safe T Home offers security and strength — the round, fireproof structures can withstand high winds and earthquakes. Ballast boxes along the sides of the grain bin can be filled with soil to anchor the structure to the ground and provide space for a garden. Homes can come with an optional water-harvesting system capable of collecting 16 gallons of water from less than half an inch of rain.

Disclaimer: for information and entertainment purposes only.