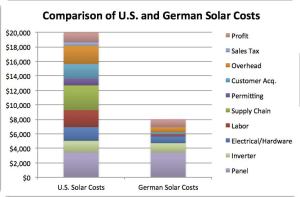 The European Union announced Tuesday that it is imposing anti-dumping levies on imports of Chinese solar panels, in a move that could trigger a trade war between two of the world’s largest economies.

EU Trade Commissioner Karel De Gucht said the 27-nation bloc will impose a tariff of about 12 percent on the import of solar panels, cells and wafers from this week, increasing it to an average of 47 percent in August unless a settlement is reached with China in the next 60 days.

Does the manufacture of your solar panels effect the value of your system?Contact the appraisers at www.scappraisals.com for your value questions.

China, the world’s largest producer of solar panels, is accused by the EU of selling them below-cost — a tactic known as dumping — to corner the market. Its exports of solar panels to Europe totaled 21 billion euros ($27.5 billion) in 2011.

The cheap Chinese products are flooding the market and threaten to bring down EU manufacturers, De Gucht said in Brussels, Belgium.

According to EU calculations, a fair sale price for Chinese solar panels should be 88 percent higher than what they are being sold for.

“It has the potential to destroy an important industry in Europe if we don’t act today,” he added, noting that more than 20,000 jobs in Europe are at stake.

The EU is China’s second-biggest business partner after the U.S. Solar panel exports in 2011 stood for about 7 percent of China’s total exports to the EU.