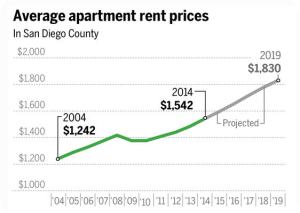 Over the next five years, rents in San Diego County are expected to rise almost twice as fast as they did in the preceding decade, according to projections by CBRE.

Speaking to about 200 people at a panel held Thursday by the San Diego County Apartment Association and the Certified Commercial Investment Member San Diego chapter, Hall said demand for rentals has increased because of three major factors: millenials are moving out of their parents’ homes, previous homeowners now choose to rent, and others still have credit issues from the Great Recession and can’t qualify for a mortgage.

disclaimer: for information and entertainment purposes only