Data In – Reneables not stopped by cheap oil 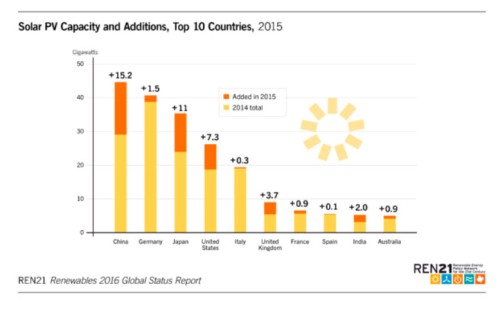 The report looked at wind, solar and geothermal energy, as well as energy from biofuels, like sugarcane. It did not take nuclear energy or hydropower into account when calculating renewable energy capacity.

While the falling cost of solar and wind power drove the increase, renewables also got a bump from new investment by private companies and national governments, according to the report. Overall, investment in renewables hit $286 billion in 2015, up from $273 billion the previous year.

Wind and solar accounted for a majority of new renewable energy projects in 2015. The world’s solar capacity has been growing steadily for a decade, and last year saw the biggest leap in new solar capacity ever.

This entry was posted in Renewables and Energy and tagged solar data, solar panels. Bookmark the permalink.