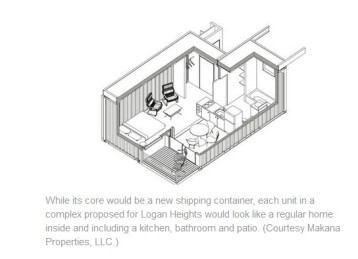 The region’s first housing project made from shipping containers could open as soon as April, providing homes for 21 formerly homeless veterans and possibly paving the way for hundreds of new affordable and median-priced homes in the near future.

The units are planned for a vacant lot at 2941 Imperial Ave. in Logan Heights and the project is proposed by developers Michael Copley, Jr. and Doug Holmes, partners in the real estate company Makana Properties, LLC.

“It’s just kind of a cool factor that that I think a lot of people will like,” Copley said about the container project. “It’s a popular topic right now.”

While the first project will bring only 21 units to the city, Copley said it could demonstrate a way to build new homes much faster and for much less money than conventional housing. If other developers follow their lead, that could mean thousands of more units, fewer homeless people on the street and fewer homes crowded with roommates, freeing up more vacancies for families.

In San Diego, each 320-square-foot unit would have its own patio, kitchen and bathroom. While the units will be built from metal shipping containers, they will be insulated and have interior drywalls. .

Of the 21 units planned for Imperial Avenue, one will be for a household classified as very-low income, 10 will be for households making 80 percent of the area media income and the remaining 10 will be priced at market-rate.

disclaimer: for information and entertainment purposes only