The government-run alternative to San Diego Gas & Electric, known as community choice aggregation, is getting some competition from the investor-owned utility.

To reach its goal of using 100 percent green energy by 2035, the city of San Diego has been looking at establishing a community choice program for more than a year.

Now Mayor Kevin Faulconer’s office has said it will also study a plan submitted by SDG&E for going all green within the next two decades.

“We’re excited to transition San Diego to 100 percent renewable energy, and research done this year identified two programs that could help us get there,” said city spokesman Greg Block.

Under community choice, SDG&E would continue to operate the electrical grid and charge for deliver power, but elected officials would assume control of the buying and selling of that electricity from power plants to city customers.

Ratepayers can opt out of the government-run program if they prefer the utility’s rates, potentially creating competition between the two entities.

The utility’s counter proposal to community choice is expected to be released to the public in the next two weeks.

Posted in Renewables and Energy 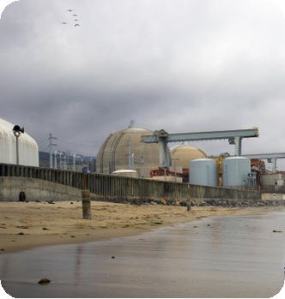 A majority of utility customers in San Diego and Orange counties say climate change considerations should weigh in replacing power from the recently retired San Onofre nuclear plant, according to a survey released Wednesday by the Sierra Club.

A state-endorsed plan on how to replace San Onofre’s power is due in early 2014. The coastal plant in northern San Diego County provided enough electricity to sustain 1.4 million Southern California homes until it was shut down in January 2012 because of a radiation leak, and the plant’s voltage also was critical to importing electricity from outside the region. The dual reactors were retired in June because of faulty replacement steam generators.